When I was a kid, no one of my family was working with computers, but both my father and grandfather were early adopters, so I have always had a PC at home since I have memory of it. And my father let me play around with it as a hobby, we learned together how to fix it and how to re-install the OS and troubleshoot it. 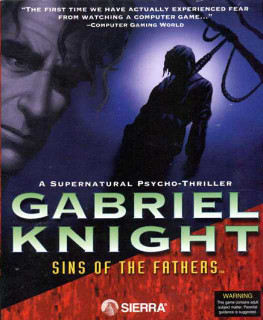 If I had to point what started my love of video games, it would be the 4 floppy disks with a pirate version of The Secret of Monkey Island that made it to my home somewhat. As a kid who loved to read, the idea of an interactive story blew my mind much more than the action packed games I had played briefly and badly up to that point.

During those early times I gravitated to games with some kind of narrative. I favoured the more “serious” adventure games from Sierra like Laura Bow, Police Quest and Gabriel Knight than the comical masterpieces of Lucas Arts (although Loom and Fate of Atlantis are between my top games of all time). In the console side,  my genre of choice were the Japanese action RPGs that came with very impressive editions to Spain: Illusion of Time, Secret of Evermore and Terranigma.

In high school I discovered the world of pen and paper role-playing games and I drifted a bit away of video games for a while, spending my free time at home reading rule books, creating character backstories or preparing adventures to GM.

I was quite sure that I wanted to study something to do with computers. I studied Engineering in Computer Science at Universitat Pompeu Fabra, Barcelona. I had very fond memories of that time, and I was quite an active member of the PLUG (our Linux User Group). Although I always kept a Windows boot at hand, in order to play PC games.

When I was on my second year, I discovered a game that made me rekindle the video game fire and I think was a big part of me wanting to do games for a living: Star Wars Galaxies. As a role player, the idea of inhabiting a virtual world was really compelling and I found myself building a quite profitable Armorsmithing business in the FarStar-EU server. The economy of virtual worlds is something that interests me since then and probably a reason I am quite heavy F2P player.

After Galaxies, I tried most of the big games on the booming MMO genre: Dark Age of Camelot, EverQuest 2, City of Heroes, EVE Online, Guild Wars and, of course, World of Warcraft (although I didn’t get hooked until some years later, when Wrath of the Lich King was released).

In my last year of the degree, I made friends with the guys that were doing a rather funny video game show in the local radio station, Game Over,  and I ended up collaborating in the show for three years.

The video game scene in Spain had started to resurface by then. Pyro Studios was very successful and my university had started a Masters Degree a couple of years before. I decided to try it and see if I could get a job programming video games. After the masters I managed to get hired at Digital Legends, I suspect because of my Linux and Python knowledge, but I am not ashamed of it.

I learned in my time at Digital Legends working first with Nokia and N-Gage and then being exposed to a lot of platforms during the mobile explosion. A lot died fast, but I was able to see the birth of the iPhone (and we were on a Keynote) and Android.

After 7 years at Digital Legends I felt the need for something new and I wanted to work abroad. Remedy was testing the waters in iOS, and they offered me the chance to come and work in Finland with a team of very experienced mobile developers.

I worked on two unreleased mobile projects at Remedy. It was a great place to work, but my time there was shorter than I expected because they decided to move away from mobile so instead of  jumping to AAA, I applied to Supercell who, at that point, were looking for a programmer with Android experience for the Hay Day team.